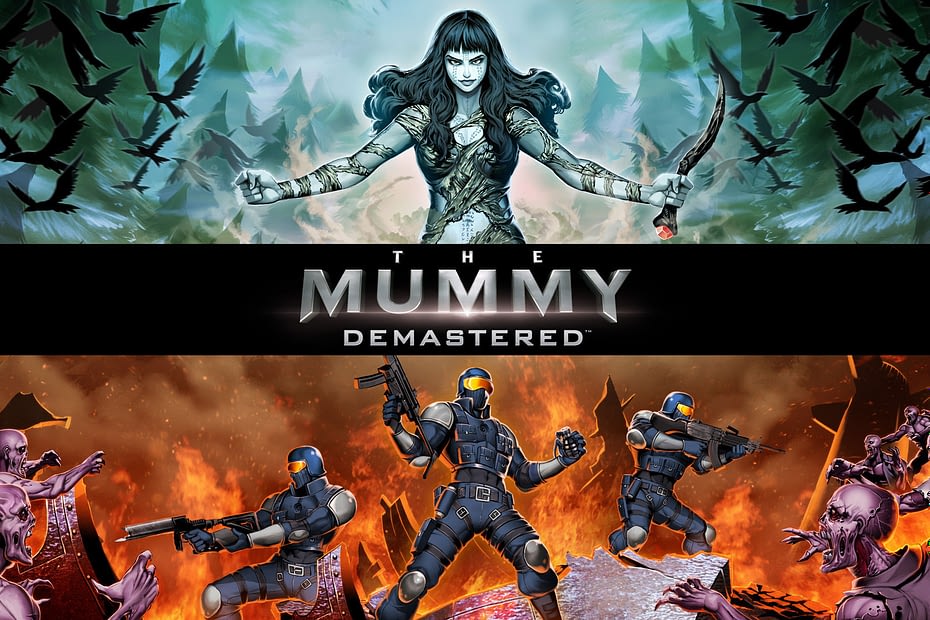 Do you remember back around 2015 when Universal Pictures was building hype for its interconnected “Dark Universe” which would include all the big bads of the time from Dracula to Frankenstein to the Wolfman and everyone in between all connected via the Prodigium, a secret society dedicated to hunting supernatural threats which, as we found out in 2017’s The Mummy, was run by Doctor Henry Jekyll (played by Russell Crowe). This game is a part of that?

Tom Cruise also started in that movie along with other great actors such as Courtney B. Vance, Jake Johnson and Sofia Boutella being directed by Alex Kurtzman (People Like Us, Start Trek: Discovery) with a script written by Christopher McQuarrie (The Usual Suspects, Jack Reacher, Edge of Tomorrow, M:I Fallout) and Robert Koepp (Carlito’s Way, Jurassic Park, Mission: Impossible); however, no amount of marketing or start power could save that movie from itself. In fact, it was solely responsible for the early demise of the entire “DU” before it even set off from the ground.

And this game is based on that?

Lo and behold, in that same year WayForward (the Shantae series, Adventure Time: Explore the Dungeon Because I DON’T KNOW!) released a video game based on The Mummy, and after playing it I’m not sure where the inspiration for this game actually came from because it doesn’t feel like the movie… and that’s a good thing!

I didn’t know what to expect from this game when I downloaded it onto my Switch. Just looking at the pictures without playing it or watching videos and I thought this game would be similar to Contra or Turrican in nature – a more action-packed affair than anything else. How else would you make this property into a game? Well, as it turns out, you make it a Metroidvania game.

In The Mummy: Demastered you play a random agent in the Paradigium who must go in and investigate the mystery at a dig site that has gone quiet. It is quickly revealed that Princess Ahmanet has been released and is threatening all living creatures thus sending you on a mission to track her down and bring an end to her power.

You do this by venturing into various areas both above ground and underground while battling Ahmanet’s minions. Lucky for you, scientists have been working on weapons and other items to help you in your battle. Also, you will unlock certain trinkets taken from ancient statues that will give you power-ups to also help you make it into new areas on your journey.

There is still connective tissue that ties this game in with the movie: the Paradigium is the main organization behind this whole situation. You are after the mummy which looks similar to the mummy of the movie. Some locations from the movie show up like the overturned ambulance in the forest, the dark subway system and the Paradigium headquarters. Aside from that, this game goes off in its own direction, and that’s a great thing!

The graphics are beautifully drawn in pixel format and wonderfully designed! They are drawn in three layers – background, mid-ground and foreground – with parallax scrolling enabled which is a 16-bit staple that moves each layer at different speeds giving the backgrounds tremendous depth.

The locations are overall interesting ranging from dark caves and subways systems underground to bright moonlit forests and even a huge clock tower drenched in red light seemingly ripped from Castlevania itself! This variety helps keep each location fresh on your eyes as well as fresh in your mind when you’re trying to remember where you need to go back to in order to unlock a part of the level because you got a new power-up.

Being a Metroidvania game, that will happen quite a bit, but TM:D makes it easier on you giving you a fast travel system with helicopters that take you between certain points on the map. This helps reduce the tedium that comes with games of this genre.

As stated, the reason you will be traveling around these levels is so you can unlock weapons, items and power-ups that will help you take on the threats you will face throughout, and this part is a mixed bag. The weapons are varied enough to keep them interesting. Aside from the submachine gun you start off with you get an assault rifle, shotgun, flamethrower, missile launcher, plasma gun and more. You also get a bomb in the form of a grenade, incendiary grenade or C4. However, you are only able to hold two weapons (along with you submachine gun) and one bomb. On the surface this seems like it would be a great way to inject a little strategy into the game, but what it really does is force you to pick two of your favorite guns and the C4 since that bomb is the only one that will blow open the various metal doors in your way. Unlike games like Metroid that make their weapons needed in order to access certain areas, these weapons are really just there for the cool factor of each.

Yes, it does get a little more intricate than that. Underwater areas prevent some weapons like the flamethrower from functioning, for example, but you’ll always find a way to work with what you have rather than travel back to a create just to change your weapon loadout to prepare for battle.

The power-ups run into a similar issue. Yes, they allow you to gain the “skill” to get into previously locked areas, but they lack the pizzazz that you might find in other games. By destroying various statues around the levels, usually trapped behind a boss, you’ll be able to increase your jump height, your run speed, and be able to climb across ceilings among other things. Not very inspiring, but they get the job done.

There are plenty of enemy for you to face in this game that will challenge you in different ways from possessed ravens that weave through the air to speedy rats that cling to the walls and climb all around you. Most all of these enemy are based off the Metroid template, and that’s not a horrible thing. The bosses range from bigger versions of some enemy you’ll face in the regular sections (giant spider, for example) to dragons and even a god. Through it all, you’ll have to watch your enemy’s attack patterns to avoid being hit and give yourself the optimal opportunity to take them down. If you don’t, you’re character will become one of Princess Ahmanet’s minions and you, as a new agent, will have to track the other agent down to regain your weapons and items and continue the story.

You’ll do this to a rocking synthwave soundtrack by Monomer that helps keep a beat while you decimate your enemy throughout the course of the game which, honestly, won’t be that long as I finished this game in around 6 or so hours. You can look at that in a couple of ways, but I love a game that doesn’t overstay its welcome, and that’s just what The Mummy: Demastered does.

From the rocking synth soundtrack to the beautiful visuals, to the tight controls The Mummy: Demastered will keep you engaged with what is happening on screen even if it’s for a short period of time. It won’t redefine the genre or propel it into new territory, but it’s a solid entry all around. Grab your favorite weapons from the cache and run head first into the fray as you get caught up in a story even more interesting than the movie that inspired it.