A Tale of Two Games: A Blair Witch Review 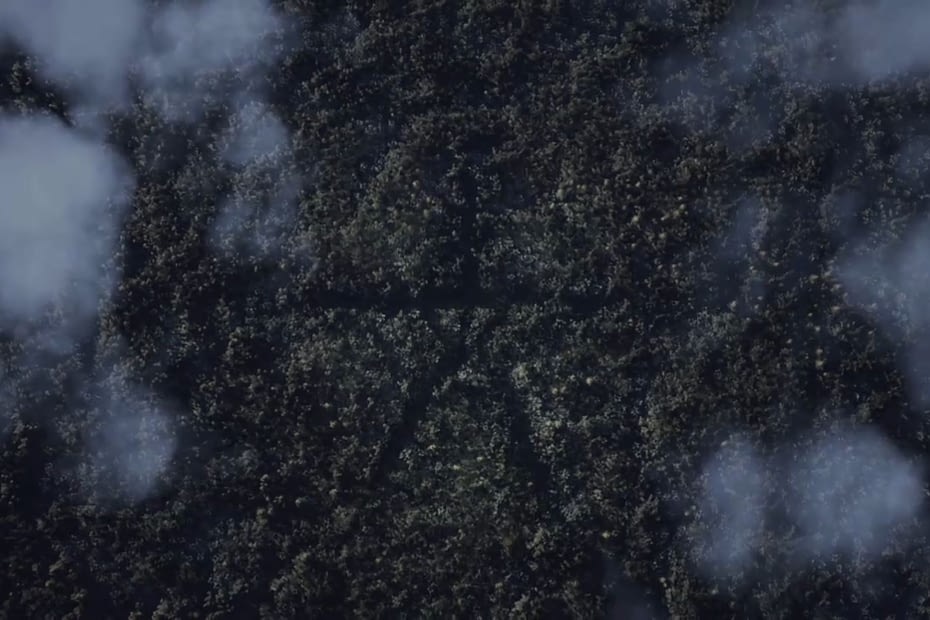 Twenty years after the original found footage film took the world by storm, Bloober Team – the studio behind Layers of Fear and Observer – resurrects this franchise in an interactive form to tell the story of the search for a missing boy in the Black Hills forest that leads to revelations both good and bad.

Blair Witch starts off well and with good intentions.

Ellis Lynch, the main character, is arriving late to join a search party for Peter Shannon, a nine year-old boy who has gone missing in the Black Hills forest. This intro allows you time to familiarize yourself with the controls of the game, gather some supplies, play a few games of snake on your cell phone, speak with the other members of the search team over walkie-talkie, and hang out with your companion, Bullet the dog.

You quickly find out that Bullet is not only your friend and confidant throughout the game, but also your emotional support animal. Elias, much like many soldiers returning from the battlefield, is suffering from PTSD from his actions overseas and Bullet is there to comfort him in times of need. Beyond that, you can either pet (praise) or reprimand your friend as well as give him commands to seek, stay or stay close to you as you work your way through the forest but these are limited in use as we’ll get to in a moment.

Another interesting mechanic the game introduces is the camcorder. Yes, there is found footage in the game in the form of blue video tapes which reveal story elements, but it’s the red tapes that are far more interesting. Using the controls on the camcorder and by being in the correct place in the game, you are actually able to manipulate reality. Is a tree blocking your path? Look around and you’ll find a red videotape that happened to record the tree falling. By rewinding this footage, you are able to make the tree rise in real life giving you access to the new area. Far-fetched, for sure, but definitely cool.

These elements as well as a competently created and vivid atmosphere that drips with suspense help to create an excellent first couple of hours of gameplay that pull you into this world and gives you the drive to carry on through everything building around you. However, as cool as all these elements are, I don’t feel that they are explored to their fullest potential. Bullet, for example, mainly serves as a pointing dog showing you the direction of twig enemy that pop up from time to time (which you dispatch in Alan Wake glory with your flashlight) and as your emotional tie to the real world which is wonderfully done in one particular scene. All other elements seem to be wasted as the only thing he really fetches are empty bottles (don’t litter, people!) and you only need to tell him to stay close during a part nearing the end (although you will be recalling him a lot).

The camcorder idea is cool, but I wish it resulted in puzzles that forced the player to look at the bigger picture instead of simple one-off scenarios. For example, if the result of watching the video tapes opened up and closed multiple areas of the map placing you in a juggling act of past and present (which would play directly into the story) to get through almost maze-like areas – an idea that is played with in miniature near the end – I think this device would feel more relevant to the story rather than a tacked on idea.

Aside from that, Bloober Team pulls out all their original tricks to try to make this a great game, but it feels rushed in spots. Specifically I remember being on the train puzzle moving around the track trying to collect pieces of a machine that will move a log covering the track so you can continue the game. If you haven’t completed the puzzle and you try to move past the log, you will loop back around to the beginning of the track hearkening back to wonderful looping areas first seen in Layers of Fear. Only here, the transition is not seamless. You see the textures change and trees pop in as you rotate around which manages to pull you out of the experience and remind you that you are in a video game. This isn’t the only time it comes up either, but it is the most prevalent.

Ironically, it is shortly after this section that I feel the game takes a huge turn for the worse. Vague objectives, overused ideas and beating the players over the head with cliched story tropes that you have already figured out on your own help pull down the game from where ever it managed to clamor to.

The biggest culprit of this is the final portion of the game after Bullet dies and nearly all the gameplay elements you learned in the beginning of the game are stripped away leaving you into a repetitive, looping zone. I understand what they were going with, even though I don’t necessarily agree with it.

Ellis is a good-enough character, I suppose, but all that’s presented to us is a heavily cliched, trauma-induced victim. He is not only a military veteran with PTSD but a police officer who has gone through a traumatizing incident and a husband who is in a broken relationship because of his inability to cope with past events. Being a veteran of a foreign war, I can relate to the ideas being displayed on screen. Hell, my brother who spent nine years in military conflict in South America and became a police officer in a broken marriage afterward could be the blueprint for whom they based Ellis off of. However, I wish there was more light in the darkness when it comes to his portrayal.   There’s a point in the game after a flashback sequence in which Ellis hugs Bullet that nearly brought me to tears because of the rawness that is displayed. Here is a man stripped of everything and laid bare, and his only saving grace is the last living thing he has left in this world: his dog, Bullet. Without him, Ellis would succumb to his darkness which he does after your companion’s death, and that’s when the game falls flat.

Yes, it is this act that partially sets him on this path, but the method by which your character gets here is sluggish to say the least. Eventually, you enter a mysterious house continuing your search for the boy which leads you to the basement which reconnects to ideas from the original movie. However, instead of meeting your end, you continue to slog through Bloober Team’s coup de grace.

You repeatedly get looped through this house being lead through different rooms as you get bombarded by elements from your character’s past that you have already figured out on your own while trying not to look at creatures that will insta-kill you if you seemingly even glance in their direction all while waiting for the game to end. I grew so tired of this looping event that I came to the conclusion that the development team wanted to be so meta that they decided to force the player to actually feel Ellis’ weariness and desperation for things to end by having them trudge through this mess. Sadly, they accomplished this as I turned the game off and deleted it shortly after.

Looking back I honestly have to laugh because this feeling actually may not have been far from what they wanted to accomplish. The house is a representation of Ellis’ broken mind and he is constantly looping through these memories – bombarding himself with these traumatic incidents rather than letting them go because he wants to continue punishing himself for things he thinks were his fault. Without Bullet – his light – he is constantly in the darkness of his mind not being able to escape. However, ideas like these don’t make for a great game.   What started off as a wonderful experience for me was quickly sullied in the last couple hours of repetitive gameplay that stripped away what was built previously.

The first half of the game, even with some miscues, is a great horror game that pays homage to the original movie that gave birth to it while creating a unique experience on its own. The graphics and sound are great, and the atmosphere built is truly wonderful. However, by the time the second half rolls around I found the game to be extremely repetitive and a slogging mess.

An easy pass for one of Bloober Teams better creations… which is pretty much everything else they have made.